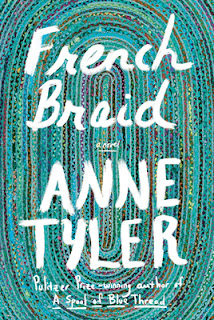 French Braid by Anne Tyler is a very highly recommended portrait of a family. No one authentically portrays families in their frailties and strengths like Tyler. This exceptional novel provides uncomfortable truths, allows a few self-deceptions, little kindnesses, and little cruelties while depicting a Baltimore family.

French Braid follows the Garrett family over the course of sixty years. In the opening set in 2010, Serena and her boyfriend are in a Philadelphia train station when Serena thinks a man in the crowd is her cousin Nicholas. She hasn't seen him for years and can't really identify him. Her boyfriend thinks that there is some hidden secret about the distance between her extended family members. After this opening scene, the novel drops back in time to provide a portrait of the family over several decades.

In 1959, Robin and Mercy Garrett and their three children, oldest daughter Alice, her younger sister fifteen-year-old Lucy, and seven-year-old David, take their first and last family vacation. It becomes obvious why they have never taken a vacation. Robin is uncomfortable without a routine and worries about costs. Mercy simply wants to wander off alone and paint. Alice is the dependable one. Lucy is absent running around with an older boy she met. And quiet David is content playing with his plastic GIs he calls veterinarians. This vacation captures the essence of the family that will be confirmed over the years.

The narrative then unfolds over the years through the perspective of individual family members, capturing their lives and the distance between them. David remains distanced from his family, only occasionally joining family events, which are few and far between. This is where Tyler's unsurpassed skill and artistry is shown in her ability to create and develop realistic, sympathetic characters. The portrayal of each character is insightful as specific details are revealed and clarified over the years.

Tyler has been one of my favorite writers for years and French Braid perfectly showcases why. The quality of her writing is always perfect, finely crafted and exemplary. She always depicts her characters, who are average people, with such sympathy, warmth, insight and clarity. There is kindness as well as cruelty in their intermingled lives. Nothing huge or shocking happens in the plot, but much as in most ordinary people, there are small incidents and events that can add up. Characters do make some major choices, but it is presented as an event, not a crisis, and it is telling how the characters react to these crucial choices. Everyone should read this novel. French Braid is one of the best novels of the year.

The title comes from a discussion between David and his wife where he explains that families are like French braids. When you undo them, the hair is still in ripples, little leftover squiggles, for hours and hours afterward. David said, “that’s how families work, too. You think you’re free of them, but you’re never really free; the ripples are crimped in forever.”

Disclosure: My review copy was courtesy of the publisher/author via Edelweiss.