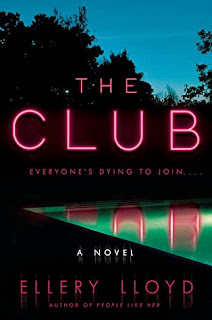 The Club by Ellery Lloyd is a recommended locked room murder mystery set in an exclusive resort off the English coast.

Ned Groom is CEO of the Home Group, which has several members only clubs across the world. They are known for catering to their very elite clientele, so when the Island Home is opened up off the coast of England, the three day launch party is a coveted invitation. Island Home is located on a private island and is accessible by car only by a causeway at low tide. In the prologue two unidentified people are driving on the causeway when, as the tide rises, they realize they are not going to make it. Naturally a death on this island is big news, so more than one is unthinkable.

The narrative is told from the third person point-of-view of four characters: Jess, a new housekeeping manager; Annie, the head of membership; Nikki, Ned's personal assistant and one of the founding members; and Adam, Ned's younger brother and a co-founder. Additionally excerpts from a Vanity Fair article are inserted at the end of each chapter.

This follows the formula for a classic locked room mystery. While very well-written, after the opening car scene the pace slows way down and readers will have to have patience for being introduced to fictional celebrities, background information, and gossip. And there is a plethora of background information and characters to learn. For the purposes of a mystery following this closed-room structure, it might have behooved the husband-and-wife writing team Collette Lyons and Paul Vlitos who are Ellery Lloyd to make the introduction of the characters and their stories more succinct to keep the plot moving along which would assist in holding a readers interest.