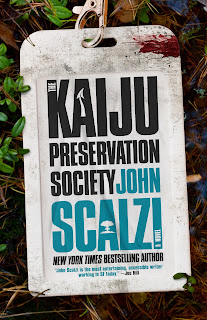 The Kaiju Preservation Society by John Scalzi is a very highly recommended hilarious and action packed science fiction novel. I really enjoyed this one!

Right when New York City is facing lockdowns, Jamie Gray is fired as a marketing director during at füdmüd (FoodMood) by the insufferable owner/ boss Rob Sanders, and ends up being a 'deliverator' (driver) for them because it is the only job available. When making a delivery to an old acquaintance, Tom, he recognizes Jamie and ends up recommending going to an interview for a job at KPS. He describes it as an animal rights organization where he needs someone who can lift things. Jamie can certainly do that. What he doesn't tell Jamie is that the animals are not on our version of Earth, but in an alternate parallel Earth. The endangered animals, Kaiju, are mountain-sized Godzilla-like creatures (thus the name). KPS stands for the Kaiju Preservation Society.

This is an enjoyable, hilarious, adventure novel full of funny, snarky quips, incredible action scenes, references to other science fiction novels, and the enjoyable "that's a great name for a band" game. It is a read-in-one sitting book because you won't want to stop reading and, well, it's a short novel. Scalzi says in the afterword that he meant for this to be a fun novel and at that he certainly succeeded. This is a stand-alone novel and would make an excellent movie.

I saved several passages that made me laugh and gave me great pleasure. I'll share a couple that don't need a language warning: "They have vegan cheese." "No, they don’t. They have shredded orange and white sadness that mocks cheese and everything it stands for." and this gem, “When you finish your training and survive your first mission on the jungle floor, you and I can sing ‘Total Eclipse of the Heart’ as a duet at karaoke,” Tagaq said. “Until then, you learn.” She handed the shotgun to me. “Let’s start with this.”

Jamie is a great character, intelligent, witty, snarky, and I immediately felt a soul-connection to. Much of this is due to experiencing a company reorganization at the beginning of the pandemic which left me in a similar position, a huge pay cut, a change in job title, but in my case the expectation to do the same work and all during a time when there were no job options available. When imagining Rob Sanders, I did project a very specific physical appearance to him. While there isn't a great deal of in depth character development, they are all portrayed as realistic individuals and you can easily distinguish between the characters. Sanders is really more of a caricature of an antagonist, but, obviously, it worked for me and I gave him additional traits on my own.

As for my fluid rule that authors need to keep their editorializing on personal social/political views on contemporary topics to themselves and out of books to extend the longevity of the novel, well Scalzi's gonna Scalzi. Most readers will know opinions will be present but at least he's talented enough to integrate it into the story and make it a somewhat acerbic mirror of the situation during the pandemic. However, time has passed since it was written and many of the comments do feel dated now at publication, so my rule still stands. Scalzi gets a pass for the sheer pleasure and enjoyment The Kaiju Preservation Society provides.

Disclosure: My review copy was courtesy of Tor Books via NetGalley.
Posted by Lori L at 11:44 AM