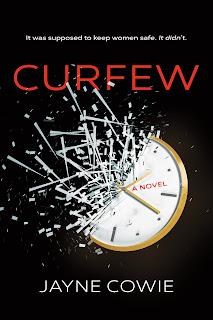 Curfew by Jayne Cowie is a recommended dystopian novel set in a world where men have a curfew.

In Great Britain the Prevention of Femicide Act of 2023, commonly known as the Curfew Laws, were a result of known figure being murdered by an ex-boyfriend. Women revolted, resulting in the Curfew. Now all men starting at age 10 must be tagged and can be tracked. Men are not allowed outside from 7 pm to 7 am. Now women dominate workplaces, public spaces, and government and there is no gender pay gap. At the opening when a woman is found murdered in a park early one morning, the assumption is that the crime was committed by a woman because all men were still under Curfew when the crime occurred. The exception is one longtime police officer, Pamela, who thinks men should also be considered when looking for suspects.

After the opening, we go back in time four weeks and are introduced to a cast of characters who may all be the victim from the opening. Sarah is a single mother who works at a tagging center. Her ex-husband is in prison for a curfew violation. Cass, their 17, almost 18, year old daughter, is angry at her mother for a host of reasons and openly debates the wisdom and need of the Curfew Laws at school. Cass's teacher, Helen, is going to cohab counseling in hopes of it being approved that she and her boyfriend Tom can live together and start a family. As we follow their movements leading up to the murder, we know any of these women could be the victim.

The narrative is told through the point-of-view of each women in alternating chapters. The only first person narrative is Pamela's as she investigates the murder. With the exception of Cass, the characters are all more caricatures rather than portrayed as real individuals. Cass really comes off as a know-it-all 17/18 year old. Essentially none of the men are to be trusted and there is no likable male character in the novel. Not all violence is by men. Not all women are nonviolent. And there are many more good, well meaning people than violent malevolent people. Inequity is unhealthy from either point-of-view.

The plot started out strong as the murder investigation in this dystopian society captured my attention, but it soon loss some of the opening appeal. While trying to reverse gender roles, the narrative overly simplifies them. Additionally, the plot fails to take into account the ability to work remotely, allowing men and women to work, earn a good living, while men still follow the curfew. Since none of the men are presented as likable, the premise of the plot begins to ring hollow. While the opening premise was compelling, the novel soon began to wan and get bogged down in the simplification of the characterizations and predictability of the plot. This started out as a five and slowly began to lose points.

Disclosure: My review copy was courtesy of the publisher/author via NetGalley.
Posted by Lori L at 12:25 PM