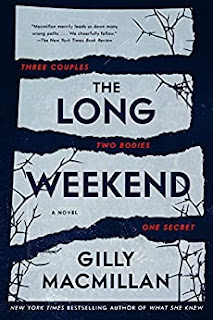 The Long Weekend by Gilly Macmillan is a recommended psychological thriller.

Ruth, Jayne, and Emily, are all traveling for a weekend getaway to Dark Fell Barn, an isolated guesthouse in the north of England. The husbands have a long term friendship that spans years back to their school days and this is the catalyst for the group get together, so it is disconcerting when all their husbands have to delay their arrival by a day. Also missing is Edie, the only female in the group of friends. Her husband who was part of the group of friends died suddenly and she is not attending. When the women arrive at the remote location, they find accompanying a bottle of champagne a note from Edie telling them that one of their husbands will be killed before they return home.

With a powerful storm moving in and no phone or cell service, the women are truly isolated and increasingly uncomfortable with the situation. They are all have secrets and none of these women would chose to be friends without the relationship of their husbands. Ruth, married to Toby, is a physician who recently gave birth and is descending into alcoholism. Jayne, married to Mark, is a former military intelligence analyst and has PTSD. Emily is much younger than the others and married to Paul, who is the oldest. Due to a difficult childhood, she is struggling with insecurity and trust issues.

The narrative is told through multiple viewpoints, including the three women, the farmer who owns the guest house, and an unidentified person who has set a maniacal plan into motion. There is a confusing lack of transition between narrative voices in the composition which distracts from the novel until much later, after you can tell whose voice it is. There are are only three chapters and no obvious breaks between points-of-view.  This structure while using the different point-of-view to propel the plot forward was confusing until you had a firm idea who are the different voices.

There isn't one of the characters who is particularly likable, but they are all well-developed. The atmosphere is tense and that tension increases throughout the novel to a histrionic level. The premise isn't entirely original, the format the story is told in is initially confusing, the characters are annoying, but for some reason, perhaps the actual quality of the writing and descriptions, I kept reading. This one is hard for me to rate. 3.5 rounded down

Disclosure: My review copy was courtesy of HarperCollins
Posted by Lori L at 3:53 PM