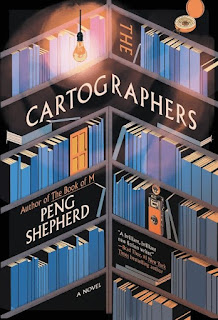 The Cartographers by Peng Shepherd is a very highly recommended, outstanding, creative, and enchanting thriller/mystery. What an excellent novel!

It is no wonder Nell Young's greatest passion is cartography since her father, Dr. Daniel Young, is a cartographic scholar who rules the map rooms at the New York Public Library. She was thrilled to be an intern at the library until the two had a terrible argument over a map that resulted in her being fired and summarily shunned by other serious cartographers. Nell had not seen or spoken to her father in seven years when she received a call informing her that he has died in his office and asking her to come to the library. While in his office she discovers in the hidden compartment in his desk the same map the two fought so bitterly over seven years earlier.

The map is ostensibly a worthless road map from the 1930's. The kind of map you would pick up at a gas station and throw in the glove box. Why would this map be hidden as if it was a treasure? Nell serendipitously slips the map into her bag. Later, while she is investigating, she discovers that this particular edition of the map is very rare and valuable, in fact, it may be the only known copy in existence. Did this seemingly innocuous map lead to her father's death? Nell's search for the truth broadens to encompass the map but also of her parent's college friends and her mother's death.

Shepherd does an exceptional job tying together elements of a thriller, mystery, and magic realism into a thoroughly engaging novel exploring the power of maps - and more. The question is asked throughout the narrative, "What is the purpose of a map?" and the answers are diverse. A novel about cartographers might not initially make you envision an un-put-downable thriller, but set that dubious thought aside. Yes, there are lots of maps mentioned, but it doesn't detract from the elements the comprise an excellent thriller. When the magic realism enters the narrative, you will already be fully invested in the plot and the outcome.

Nell is a wonderful fully realized character. She is passionate, intelligent, and determined. I quite liked her stubbornness and perseverance, even when facing danger. All the characters are obsessed and passionate about maps. At the same time they are all depicted as specific individuals and each stands out as their own person. You will easily keep track of who is who because of their unique portrayals beyond their love of all things related to maps.

I really enjoyed The Cartographers and it is a contender for one of the best novels of the year! Be sure to read this one!

Disclosure: My review copy was courtesy of HarperCollins via NetGalley.