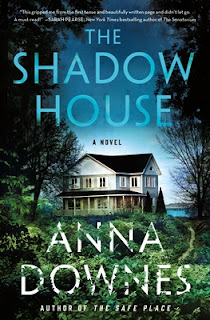 The Shadow House by Anna Downes is a highly recommended psychological thriller.

Alex Ives flees Sydney with her two children to a three month trial rental in Pine Ridge, an ecovillage in the Australian countryside. Her teenage son, Ollie, 14, scoffs at living in a commune while her baby, Kara at 8 months is teething and cranky. Pine Ridge is quiet and tranquil, surrounded by forests and the residents seem friendly. Alex is sure her family will be safe here and can start over, but unsettling things begin to occur almost immediately when Alex finds a dead bird in a box on their doorstep. She eventually learns about the stories of the Pine Ridge witch, which she is sure is just a legend, but as new disturbing things happen, she begins to wonder if there are some facts behind the rumors.

In alternate chapters the story of Renee Kellerman is told. She and her husband, Michael once owned the farm that became the site of Pine Ridge. They have a teenage son, Gabriel.

While waiting for the two narrative threads to join together, Downes creates a great deal of tension as new alarming and frightening incidents occur. Adding to the sense of an impending disaster are the ominous dreams Alex is having while she is sleep deprived from Kara's unrest. It is clear from early on that Pine Ridge may not be the bucolic and peaceful setting Alex believed it would be when they moved there. There are secrets held by many characters and the tension rises with each chapter as some new alarming incident happens.

The characters are basically well-drawn and realistic. Downes does an especially credible job writing the teenage characters. While we don't learn right away why Alex was fleeing, which is a plausible reason, it is still less straightforward why she would chose an ecovillage as her refuge, simply based on the handsome man who told her about it. Admittedly, her character is a little less appealing due to poor decisions. Starting a relationship with Kit, the man who started Pine Ridge, was farfetched. After mumbling at her to not move to an ecovillage without any conviction about the lifestyle, I sort of wanted to yell at Alex to at least wait until she has weaned her baby before casting about for someone new. She doesn't make good choices.

It does create a creepy atmosphere, but loses it's way after the start. The action does slow down in the middle of the novel. The ending leaves something to be desired. 3.5 rounded up

Disclosure: My review copy was courtesy of Macmillan via NetGalley.