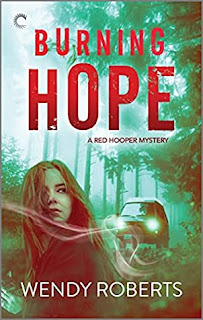 Burning Hope by Wendy Roberts is a highly recommended paranormal murder mystery and the first book in a new series.

Red (Scarlett) Hooper has been in Hope Harbor, Washington, for a few months working at Pincher's Dollarama store to earn money to buy a new battery and fridge for her camper van Bubbles (named for the bubble decals that cover it). When Red stops in early one morning for coffee at the store and finds finds the body of Murray in the storage room she immediately calls 911, but as the only new person in this small town of over five hundred people, she is obviously the main suspect. It doesn't help when the police find evidence that seems to imply her guilt and uncover her connection to two other murder investigations. Red has the psychic gift of seeing visions through fire (and she also adopts a kitten) in this mystery.

This is a well-written, quick-paced novel that will hold your attention throughout. Obviously Red knows she is a suspect and she must do some investigating on her own if she wants to find the real killer. She also meets Noah is the process and the two become an item. There are several quirky, small town characters introduced along the way and Red's estranged sister shows up to give her some advice about her psychic powers.

Red is an interesting character who is apparently just learning how to really use her psychic abilities, although she has known they existed before this. (I'm not entirely taken with the psychic premise.) This is the first novel with Red as the main character, so while there is certainly backstory and good character development, Roberts has left plenty of room for more. This is a decent start to a new series. 3.5 rounded up

Disclosure: My review copy was courtesy of Carina Press via NetGalley.