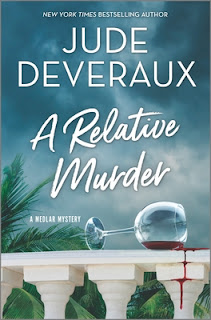 A Relative Murder by Jude Deveraux is a highly recommended mystery and the fourth book in the Medlar series.

Sara Medlar, best selling author and murder investigator, has returned to her home in Lachlan, Florida. Living with her is her niece, Kate, and friend Jack Wyatt. They are known as the Medlar Three around town due to the murder investigations they have solved together.

The current investigation is a bit more personal. Sara hoped the truth about her family would never be exposed, but with her brother Randal being released from prison, everything is about to get real. Kate has always been told by her mother, Ava, that her father died, but Randal is sure to return to Lachlan and find her. Sara played a part in Randal's conviction, so she is afraid Kate will hold this against her. Then Jack is appointed as a deputy so the sheriff can take an unexpected vacation (and hopefully miss Randal's return). Adding to to the plot before all the real confusion sets in is the dead body found in a friend's barn.

This is can be read as a standalone mystery even though it is fourth in the series. Enough information is provided that you won't feel as if you've missed something. This is a murder investigation, but it is somewhat of a lite-investigation, more entertaining than foreboding. There is some humor,  a few twists, secrets revealed, and family drama galore. The characters are well developed and vary widely from easy to relate to, personable, intelligent, annoying, and goofy. All in all a nice mix of personalities wrapped up in a satisfying mystery. This is a nice, quick enjoyable mystery to read. Those who are following the series will be happy to see this new addition.

Disclosure: My review copy was courtesy of MIRA Books via Edelweiss.