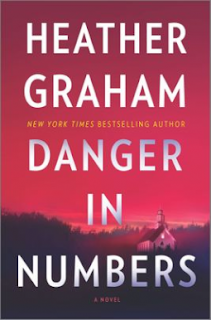 Danger in Numbers by Heather Graham is a highly recommended thriller/procedural.

Florida Department of Law Enforcement Special Agent Amy Larson and her experienced partner of two years, John Schultz, are sent to investigate a horrendous ritualistic murder on the edge of the Everglades. The FBI quickly joins the investigation because of a similar ritualistic murder that occurred. FBI special agent Hunter Forrest join the two. Hunter has information and knowledge that will focus the investigation as he specializes in ritualistic killings, extremists, and the occult. When John has a heart attack, Amy joins Hunter in investigating the murder. Amy sketches every crime scene and her sketches helped focus the investigation as she often captures subtle nuances that can be overlooked when viewing crime scene photos. Hunter and Amy work together and quickly determine the direction their investigation will take.

Hunter is a better developed main character, however Amy is not given the same character development. She is known for her proclivity to draw crime scenes, but her artistic ability seems to be a bit over-stated as a sketch wouldn't necessarily capture everything it is purposed to be able to do in the plot. Ask anyone who actually is talented at drawing. Hunter has a whole backstory to shore up his character and give it some depth. Both characters are portrayed as intelligent and insightful, as well as attractive.

While the investigation will hold your attention, there were not the twists or surprises that one expects in a procedural thriller. It is a very familiar plot with no real surprises. The key to enjoyment is simply to read, follow the clues, and reach the conclusion. The fact that a cult is involved does make it more interesting and frightening. The side story set set in 1993 actually raised the rating of the novel for me and added at least something beyond the unremarkable, familiar plot. Honestly, I could do without the partners attraction to each other as I would prefer the investigators to concentrate on the actual investigation. 3.5