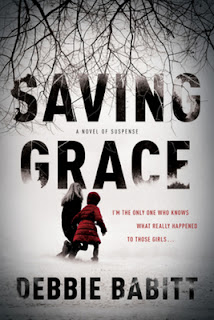 Set in two different time lines in the small town of Repentance, Arkansas, Saving Grace follows Mary Grace Dobbs' search for her salvation from her past. In 2019 Mary Grace is the first female sheriff and the single mother to Felicity. In 1995 Mary Grace was an eleven year old orphan living with her aunt and uncle when two of her sixth grade classmates went missing in an event that rocked the town. Mary Grace still has guilt over the events in 1995. Her long-held guilt could be over her temper, a bully who made her life difficult, her cousin who was sadistic to animals, or her feelings over her parent's death. When a man who was a suspect in 1995 returns in 2019, it brings a host of emotions across the town, especially when a sixth grade girl disappears.

While the story will hold your attention for the most part as you try to figure out why Mary Grace has so much guilt, the actual novel is a bit choppy and uneven. The narrative alternates between the events of 1995 and 2019. The switching back and forth in time as well as the tense, first and third person, was not as successful in this novel as it has been in others. There are enough hints and suggestions in both timelines that imply something awful is coming, which will keep you reading even during certain parts that seem repetitious and rather long-winded and slow.

Mary Grace is a character who is hard to analyze and get a read on why she feels so condemned all the time. In both timelines, Mary Grace constantly bemoans her cursed state and lack of salvation and you won't learn the reason why until the very end. Granted the ending is really a shocking twist and revelation, but getting there was a struggle at time. Part of the issue could be the constant referral to what she did, to her reprobate state, but then nothing, no disclosures, for so long that you begin to doubt that anything of any importance actually did happen to her beyond the typical adolescent traumas. Nothing is really what it seems.

Character development is actually following the same rocky road. Because you don't know why Mary Grace feels cursed and evil and you don't see any indication of her behaving that badly. It seems like she may just need some therapy and perhaps medication. At the same time the townspeople are really reduced to caricatures of a type rather than unique individuals. It also felt like there was a bit of stereotyping the residents of an area of the country. (3.5 rounded up)

Disclosure: My review copy was courtesy of Penzler Publishers via Netgalley.
Posted by Lori L at 4:33 PM