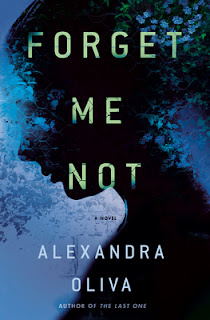 Forget Me Not by Alexandra Oliva is a highly recommended unique thriller set in the near future.

In a secluded walled-off twenty acre property in rural Washington Linda Russell's mother, Lorelei Niequist, artificially conceived Linda in an attempt to replace her deceased daughter, Madeline. It became clear that Linda was not a replica of Madeline, and from the point of that realization, Linda was basically abandoned and left to raise herself. Linda often thinks of her twin, Emmer, who disappeared when they were young. She doesn't know what happened but thinks Linda may have killer her. If Lorelei was present, she made her disdain clear and often told Linda to make herself scarce. Eventually she all but disappeared while still having food delivered for Linda. Then at age twelve, something scared Linda enough that she climbed the fence and made her way to town. From that point on, she was known as the Clone Girl and was brutally introduced to the modern world via social media. Her wealthy father, Arthur Niequist, who knew nothing of the artificial conception, is trying to do what he thinks is best for this daughter he never knew existed.

Now Linda is twenty-four and known as Linda Russell. She lives a quiet, withdrawn, controlled existence in Seattle, trying to go out at times crowds are fewer to draw no attention to herself. When/if she is identified, photographed, and it goes out on social media, she receives threats and will have to move again for her safety. In the world now people wear arm-wrapping "sheaths" that act as phones, fitbits, cameras, trackers, etc., and the only social media is SocialHub. When she has a new neighbor move in next door, Anvi Hendrickson, Linda is extremely reluctant to respond to her friendly overtures, but Anvi has a dog, Nibbler, that Linda wants desperately to pet. Linda's burgeoning friendship with Anvi becomes life changing, especially in light of what happens to her next, after her childhood home catches fire and she is thrust back into the news.

The narrative is told through Linda's point-of-view, drafts of messages Lorelei sent to Arthur, and Anvi's thoughts. It is clear that Lorelei is mentally ill and her unraveling is evident in her treatment of Linda and her messages to Arthur. We slowly learn why Linda is the way she is, what her childhood experiences were and how she is living now. Her anxiety comes through the pages and you can feel her tension, her nervousness, her anxiety, her fear. When Linda meets Anvi, you will feel wary along with Linda, cautious about this friendly stranger. Oliva's character development mimics Linda's watchful, circumspect approach to life and it serves the novel well. While we meet the characters we are judicious when considering their character and intentions.

The plot held my attention throughout and the novel is well-paced. Linda's suspicion and caution is clearly reflected in the novel and your reaction to the events going on will mirror this reaction. Oliva's ability to manipulate the readers emotions to approach the plot with this same caution through her use of a present-tense narrative is incredibly intuitive. I didn't realize this until after I was finished, and applaud the intelligence and skill involved in the choice of this presentation. I loved Oliva's previous novel, The Last One, and while I loved many aspects of Forget Me Not, I did think the sub-plot featuring GH could have been left out, even though the end of this thread was noteworthy.