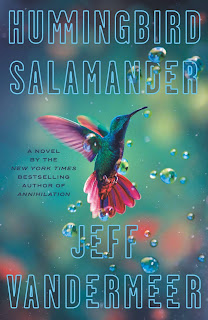 An unnamed security consultant “Jane Smith” is the narrator who states that is telling us the story of how the world ends. Jane receives an envelope with a note and a key to a storage unit. Inside the storage unit is a taxidermied hummingbird and a note from someone named Silvina with the words hummingbird ... salamander. Jane takes the hummingbird and begins to surreptitiously look into who Silvina is. Jane discovers the note was from Silvina Vilcacampa, a reputed ecoterrorist and the daughter of an Argentine industrialist. Her research, even though it was carefully undertaken, sets into motion a series of events that result in surveillance and danger from unseen and unknown enemies. Jane, though, is a strong, capable woman, physically and mentally, and she continues looking into Silvina's life even as the danger increases.

Hummingbird Salamander is an absolutely unique twisty thriller with a noir vibe. We have antagonists who are destroying the natural world and involved in exotic wildlife smuggling, but they aren't absolutely bad. We have protagonists who mean well, but are also running on the wrong side of the law. There are also endangered species, climate change, the approaching end of the world, a dark global conspiracy, and a host of unseen foes who want to stop anyone looking into any knowledge of whatever it is that Silvina was doing - but why? And the attacks are directed at everyone even remotely connected with Jane.

The thriller is extremely well written and carefully plotted to allow an increase of tension as the action carefully unfolds and the danger is ever present, ever increasing. The world described is certainly similar to the one we live in, although not entirely realistic, but in a future transmutation of the world. It is not a created new world/new reality. It does, at times have a sort of cinematic dream-like feeling. As if we are being shown the reality of what is behind the curtain, what could be a future.

Jane is a well-developed character, although not particularly likeable. She wouldn't care if you liked her either. She was a body builder, she is tall, strong, and already prepared with a go-bag to escape some threat. She is not afraid of defending her self. She does the unexpected in physical fights which put the men attacking her off-balance. She's in many ways a very good role model for women to be physically strong and mentally smart. On the other hand, she continues to call the large bag she carries "shovel pig" after her boss gave it that moniker. That's a little odd. But you will also follow Jane's actions with rapt attention right to the ultimate final revelations.

Disclosure: My review copy was courtesy of Farrar, Straus and Giroux via Netgalley
Posted by Lori L at 2:12 PM