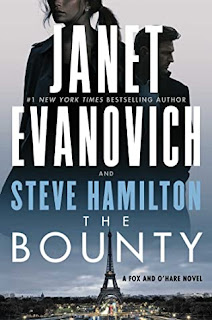 The Bounty by Janet Evanovich and Steve Hamilton is a highly recommended action/adventure thriller.

Special agent Kate O’Hare and international con man Nick Fox work together using their strengths to solve cases. The two have been sent to the Vatican to work with Interpol and the Vatican stop a would be thief, but when the item stolen is not what was expected and is instead a map and, even more shockingly, the thief is identified as Nick's father, Quentin, the hunt is on to find Quentin. When he is found, it becomes clear that more is going than Interpol knows. There is an international organization looking for $30 billion in Nazi gold, and there is a race to find it before they do. Kate and Nick work with Quentin, and Jake, Kate's father, a professor and a retire British officer work together to find the clues and decipher what they mean. At the same time they have a group of bad guys after them at every step. The key is to find clues hidden across Europe, keep them away from the bad guys, and put them together to find where the gold is hidden.

The Bounty is one of those action/adventure thrillers that requires you to totally suspend disbelief and ignore all the impossibilities that occur at every turn in order to enjoy the adventure. The group travels all over, have contacts and the ability to get what ever supplies that they need at every turn, and manage to be talented and knowledgeable do all the impossible things. I easily set aside my disbelief to enjoy the action that ranges from the Eiffel Tower, to the Swiss Alps, to Great Britain, to Austria, to Slovakia, and to the Sahara. This is a movie waiting to be filmed.

I've read one of the previous Fox and O'Hare novels. With series character development often occurs over several books. At this point those following the series know the characters and those of us who haven't followed every book have to accept that we don't know all the back story. This is easy to do as the action is the main event here and the characters are just the vehicle to get the action done. This is great escapism.

Disclosure: My review copy was courtesy of Atria Books.