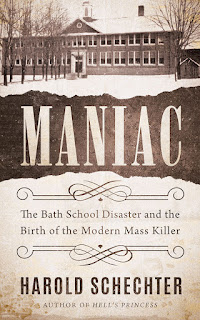 Maniac: The Bath School Disaster and the Birth of the Modern Mass Killer by Harold Schechter is a highly recommended account of a horrendous historical crime.
In 1927 one of the worst mass murders in history occurred in Bath Michigan. On May 18th Andrew P. Kehoe set off a series of planned explosions at the Bath Consolidated School that killed 38 children and 6 adults. He also killed his wife, horses, and set fire to his farm. Then Kehoe loaded his truck with shrapnel and explosives and drove to the school. He called the school superintendent over to his truck and then blew up his truck, killing both of them while the shrapnel caused even more injuries to bystanders. It was clear in hindsight at the inquest, that Kehoe was an angry man. He was especially angry about the new property taxes levied to build the school.

Kehoe was a local farmer and the school board treasurer. He was often called in to look at mechanical problems, so he had access to the school. He had purchased a huge quantity of explosives, dynamite and Pyrotol, to be used in his explosions. At the school he set the clock on his device to explode at 9:45 AM, when the school would be full of children. Shockingly, it was discovered that only part of his explosives actually exploded causing the north wing of the school to collapse rather than the entire building.
Schechter does an excellent job setting the historical context of this account of one of the deadliest school massacres in U.S. history. For example, the explosion happened on the same day Charles Lindbergh took off in The Spirit of St. Louis. He also looks into the background of Kehoe, who was born on February 1, 1872. As the first son following six daughters, he was expected to excel. There were several early incidences that point to early indications of his mental state. Although there isn't much information about his life, Schechter presents what he uncovers leading up to the madness that lead to his abominable actions. This is a book that is sure to attract true crime readers.

Disclosure: My review copy was courtesy of Little A via Netgalley.