Taking the Fight South: Chronicle of a Jew's Battle for Civil Rights in Mississippi by Howard Ball
2/1/21; 280 pages
University of Notre Dame Press 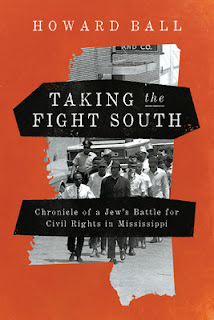 Taking the Fight South: Chronicle of a Jew's Battle for Civil Rights in Mississippi by Howard Ball is a highly recommended autobiography from 1976-1982

Howard Ball chronicles the six years, from 1976-1982, that he, his wife Carol, and his three young daughters moved from the Bronx to Starkville, Mississippi. Ball accepted a tenured position in the political science department at Mississippi State University. The move, like most moves across country, was a culture shock for the Jewish family from the Bronx and an awakening to the societal conditions in Mississippi during the civil rights struggles at that time. Ball, a historian and civil rights activist, did not shy away from the task set before him. He and Carol immersed themselves in the community working to make integration a reality rather than just a law. He was active with the Mississippi chapter of the ACLU. The family remained close to their Jewish faith in a heavily Protestant area and received threats for his activism.


This is a riveting historical biography set during a very specific time and place in America. It is important to note that Ball lived in Mississippi from 1976-1982, which means 40 years have passed since his experiences there and much has changed in the world. After finding his notes from his time in Mississippi, Ball set out to share his stories from his time in the deep South. The chapters are written as recollections of events that occurred during the time his family lived there and the struggles and obstacles they experienced.

Ball writes that Judaism asks that they observe and obey the law but also that they vigorously debate, discuss, and disagree with each other as well as take legal of political action to challenge it. This affirmation of justice has shaped both his character and the mission of his work. Taking the Fight South showcases Balls fight for social justice during his six years in Mississippi many year ago. "Distinguished historian and civil rights activist Howard Ball has written dozens of books during his career, including the landmark biography of Thurgood Marshall, A Defiant Life, and the critically acclaimed Murder in Mississippi, chronicling the Mississippi Burning killings."

Disclosure: My review copy was courtesy of the University of Notre Dame Press.