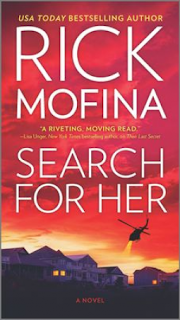 Grace Jarrett and John Marshall along with her daughter Riley and his son Blake are a blended family who are making a move across the country, from San Diego to Pennsylvania. Grace and John married two years previously after they both lost their first spouses and John a daughter due to tragedies. This move represents a big job advancement for John and a new start for the family, but 14 year-old Riley is upset about the move and being told to break up with her boyfriend, Caleb. Blake, seventeen, seems indifferent. As they start the trip in a rented RV, Grace confiscates Blake and Riley's phones so they will see the scenery rather than being glued to their screens resulting in Riley angrily stomps off to take a nap in the back.

As they enter Nevada, they decide to stop at the Silver Sagebrush, a huge truck stop complex. Grace makes the decision to allow Riley to keep sleeping and leaves her a note as the family goes inside. They return to the RV half-an-hour later and continue the trip. Grace asks Blake to check on Riley, which he pretends to do and then says she's sleeping. When Grace check a bit later, She realizes Riley's gone. John frantically tries to find a place to turn the RV around to return while Grace frantically calls the Silver Sagebrush to start the search for Riley. They are heading back when an accident totals the RV. All of this sets into motion a frantic search for Riley who can't be found at the truck stop as well as the exposure of secrets all the family members have been keeping.

Once the plot has been set into motion, the novel turns to part investigation and part family drama. There is no doubt that the intense drama and heart-stopping twists are all encompassing and will keep you glued to the pages. There are a few instances where you have to set disbelief aside, which you will easily do in order to follow the investigation. As a 14 year old missing from one of the largest truck stops in the country, she could be a prime target for all manner of nefarious deeds, so the main drama is the search for Riley. But you will also want to find out exactly what secrets the family is keeping since the existence of these huge secrets is teased all the way through the novel. The investigators question and look closely at the family members as suspects in Riley's disappearance.

The character development is secondary to the action and suspense. They are developed, but it is all at a measured pace and based on keeping the drama, tension, and suspense moving along at a fast pace. Mofina knows how to deliver the drama and suspense and that is what will keep you frantically reading to the end.

Disclosure: My review copy was courtesy of MIRA Books.
Posted by Lori L at 1:17 PM