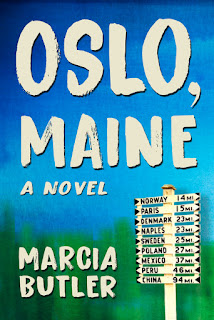 This is a story that involves a moose, a twelve-year-old boy, and three families in a small town in rural Maine named Oslo. The story begins when a female moose enters the rural area of Oslo and is caught in a trap. This event sets into motion a heartbreaking chain of events that result in an accident where twelve-year-old Pierre Roy loses his memory. His parents, Claude and Celine are struggling to cope with their son's memory loss. Claude grapples with acknowledging his son's injury and the cause of it. Celine takes pills to cope. Pierre loves reading and his life changing violin lessons with neighbor Sandra Kimbrough. She and her husband, Jim, are both musicians and live next door. Edna Sibley, is a wealthy widow whose has asked Claude to take her grandson Luc on as a mentor. Luc is a bit slow, perhaps on the spectrum, and Edna thinks he needs a male role model. Edna also advises the Roy's on appropriate books for Pierre to read.

The plot is quite simple as the focus of the narrative is the characters. Their relationships and interactions with one another highlight how very different and disparate these characters are from each other. They are all dealing with to some extent duplicity, trauma, marriage problems, trust, secrets, and health issues. Pierre is the one character that readers will roundly care about and wish the best for him and his recovery. The accident he experienced was unfortunate, but the reactions to it are heartbreaking. Edna is also a sympathetic character, but she is not as present in the story as Pierre. Beyond Pierre, the character that is the most maligned and sympathetic is the moose, but be forewarned this isn't a gentle giant quietly watching the foibles of the humans. This moose, or her calf, is abused or at risk at every turn and it is disturbing, which must be set aside in order to follow the plot.


The desire to see what happens to Pierre is what kept me reading after the first incident of animal abuse occurred. While I appreciated the conclusion of the novel, there were many head-shaking moments of people behaving badly that I had to overcome to get there. Yeah, I think it all turned out better for the characters at the end (not the moose) but I'm not sure I completely enjoyed the journey getting to there.


Disclosure: My review copy was courtesy of Central Avenue Publishing