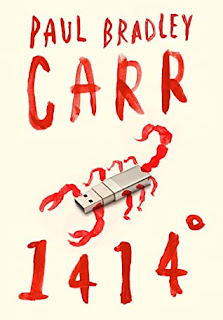 1414º by Paul Bradley Carr is a very highly recommended unique and gripping mystery/thriller that takes on Silicon Valley billionaires.

Journalist Lou McCarthy is fearless in reporting the toxic truth surrounding the Silicon Valley billionaire bro-ciopaths who get away with all manner of criminal actions. Her latest article for the Bay Area Herald exposes the CTO of Raum, a private tech company, as a sexual predator who has assaulted young women for years. The same day her controversial expose' is published, there is an Raum event where the official announcement of the multi-billion dollar initial public offering will be made.  What happens instead is that the CTO takes his life as does another man who was a subject of one of Lou's articles. Lou is blamed for their deaths, fired, and while running for her life is suddenly rescued by Helen Tyler, a powerful member of Raum’s crisis-management team, but so much more. The two begin an investigation together that points to a much deeper, meticulously projected series of events planned by a person who calls themselves Fate, and Fate has a meticulously crafted agenda in the works.

1414º features intelligent, strong, likable, self-assured, and diverse female protagonists. The characters are all depicted as believable individuals with strengths and flaws, although most of the male characters are antagonists or trolls, there are a few good men. Lou is an excellent character to carry the plot and is believable as a journalist whose passion is to investigate, dig deep, and seek out the truth. Even with their small part of the plot, Lou's mom and her friend Carol are awesome, tough women you would want to know.

This is an extraordinary, unique, complex well-written mystery that is engrossing from start to finish. It is both fast paced and satisfying. You will not be able to predict the ending, which is a wonderfully remarkable occurrence and encouraged me to continue reading late into the night. The actual mystery/thriller is strong, compelling, and unparalleled in the plot and characters. The final denouement was very satisfying.

Disclosure: My review copy was courtesy of Snafublishing.