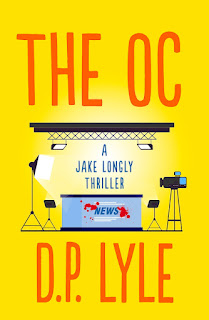 The OC by D. P. Lyle is a recommended investigative mystery and the fifth book in the Jake Longly series.

Jake Longly and Nicole Jamison are flying from Alabama to Orange County, CA for some relaxation before they go on to LA for the filming of Nicole's screen play. Once they arrive they find out that Nicole’s friend Megan Weatherly, a local TV reporter, has a stalker, which causes some concern for Jake and Nicole. After they arrive the behavior of the stalker escalates and Jake decides it's time to call his friend Pancake Jeffers, who works as a PI in Ray Longly's firm. What Pancake uncovers concerns him enough that he travels to CA to help Jake and Nicole protect Megan.

This is a snappy quick paced investigation that follows the actions of the stalker as the tone of the emails sent and the gifts quickly intensify the investigation for the perpetrator. The tension quickly rises in the plot which will keep you reading at a breakneck pace to see what happens next. There is no doubt that Jake, Nicole, Pancake, and Ray will find the stalker and justice will be served. The pleasure is found in reaching the climax of the investigation. This is the fifth book in the series but it seemed to work as a stand alone too. The other books in the series are Deep Six, A-List, Sunshine State, and Rigged.

What I enjoyed was the fast paced plot, the characters, and the well written, compelling investigation. I liked Pancake, Ray, and Jake and Nicole (when they were not bantering with each other). The playful dialogue between all the characters worked but what dampened a bit of my enthusiasm was all the over-the-top and continuous suggestive dialogue between Jake and Nicole. It just seemed a bit too much at times and it became a distraction. Some would be fine a fit right into the plot, but it went beyond that. I enjoyed the mystery and the conclusion, but I'm not sure these are the characters for me. I did like the flow of the plot enough to maybe give them another chance.

Disclosure: My review copy was courtesy of Oceanview Publishing.
Posted by Lori L at 1:04 PM