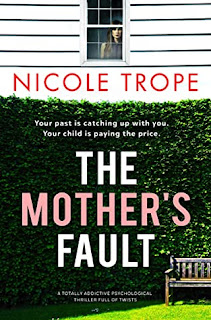 The Mother's Fault by Nicole Trope is a highly recommended novel of psychological suspense.

Beverly is a single mother of eight-year-old Riley who works hard to keep to keep their lives running smoothly. What most people don't know is that Beverly has a secret, a secret that she is sure if anyone knows it will threaten their relationship. This is why she broke up with her boyfriend, Ethan, because he was asking questions she didn't want to answer. Now Riley is starting to get gifts dropped off at their mailbox. Beverly is sure they are from Ethan, but the card isn't signed. She tries to contact Ethan to thank him, but telling him to stop sending gifts, however, he is not responding to her messages and the gifts are coming. At the same time someone is watching Beverly and Riley, someone who has unknown plans for them. And then Riley disappears from the backyard one evening, and she contacts the police, which could change their lives forever.

The narrative is told through the point-of-view of Beverly, Riley, and an unnamed individual. Riley is the only truly trustworthy narrator, but he is limited by his age and knowledge. Beverly and the unnamed narrator both are less reliable because they admittedly have secrets. It is clear that Beverly loves Riley, and wants the best for him, but she is also terrified of having her secret exposed and the unnamed narrator is seemingly determined to do just that.

The plot and fast pace of the story will be what holds your attention and keeps you reading. There is a great deal of suspension of disbelief required, especially in the second half of the novel where we learn who the unnamed narrator is and all of Beverly's secret. The big reveal of the secret and everything revolving around it was a bit over-the-top unbelievable as far as everyone's actions and I will admit to some eye-rolling over it. But, as mentioned, the novel did hold my attention throughout and I wanted to find out what really happened. 3.5 rounded up

Disclosure: My review copy was courtesy of Bookouture via NetGalley.