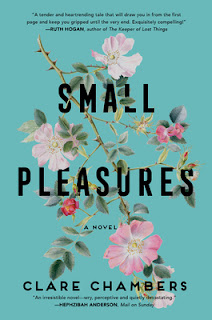 Jean Swinney, forty, is an intelligent feature writer on a local London paper who takes on the task of investigating the claims made by a woman who wrote to the paper claiming that her daughter is the result of a virgin birth. Swiss born Gretchen Tilbury, allows Jean to come visit and talk to her about her claims. She also meets her ten-year-old daughter, Margaret, and her husband, Howard. Jean arranges for Gretchen and Margaret to undergo medical tests to prove if parthenogenesis actually took place, which they willingly do. As Jean investigates Gretchen's claims, she finds herself becoming friends with the family and attracted to Howard. Her burgeoning relationship with the family provides Jean with a much needed social outlet. After years of dutifully caring for her demanding mother, the family's welcoming Jean into their lives allows her what seems like a chance at happiness.

The period of time, 1957 post-war London is captured perfectly as is Jean's finding small pleasures in the simple, ordinary things in life. The characters are fully realized and depicted as individuals with their own abilities, foibles, and talents. Most importantly, they are firmly placed in the time period and setting Chambers sets forth. You will wish happiness for Jean. Gretchen is always pleasant but an enigma. Margaret is delightful and Henry is seemingly a perfect match for Jean. Jean's mother is agoraphobic and demanding, wanting Jean to attend to her needs. All of the characters have secrets

The writing is excellent, descriptive, realistic, and sympathetic. There are two story lines in Small Pleasures, the question of the virgin birth and Jean's loneliness, and both are giving consideration. I was more interested in the mystery, but that didn't detract my appreciation of the other story line. I will admit that the pace did feel rather slow. The ending is heartbreaking although not unexpected.

Disclosure: My review copy was courtesy of Custom House/HarperCollins.
Posted by Lori L at 10:59 PM