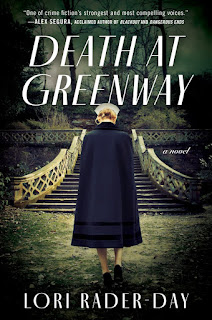 Death at Greenway by Lori Rader-Day is a highly recommended historical novel.

In 1941, after a mistake at a hospital, nurse trainee Bridget (Bridey) Kelly has been compelled to take a position with the Arbuthnots to care for 10 young evacuated children who are being sent to Greenway House in Devon which also happens to be Agatha Christie’s holiday estate. The other nurse who says her name is also Bridget (Gigi) Kelly arrives late and appears to take her position lightly and with indifference. At the estate are just the staff, who make the rules clear over what rooms are available for their use. Gigi may leave most of the work to Bridey, but her upbeat attitude and high spirits helps Bridey deal with her self-doubt and sadness over the loss of her family. When a body is found in the river, and Bridey recognizes him from other encounters, she keeps this just between herself and Gigi.

The focus of the novel is Bridey caring for the children and her growth and maturation. The discovery of a body adds a touch of mystery, but the novel is more a character study of people, especially Bridey, handling the circumstances they have to deal with during WWII. So this is really is not a mystery or novel of suspense, but it is a well-written period piece that focuses on the characters and the setting during WWII. The connection to Agatha Christie is really incidental and she only appears twice in the novel.

Rader-Day is an excellent writer and her talent and abilities are on full display here. She did her research and in the author's notes at the end she informs the readers of the history she followed and where she took a few liberties. Death at Greenway does evoke the atmosphere of uncertainty and fear and follows historical facts. The novel is evenly paced, with interesting, although not shocking, revelations. This novel shines as historical fiction for those who enjoy novels set during WWII and appreciate well conceived, realistic characters.