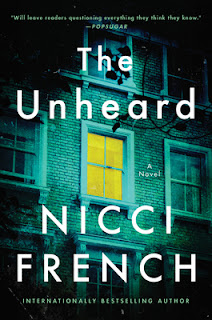 The Unheard by Nicci French is a highly recommended domestic psychological thriller.

Tess Moreau and Jason Hallam, her ex-partner, are co-parents to 3 year-old Poppy. Poppy spends every other weekend and Wednesdays with her father and his new young wife, Emily. When Poppy returns after a weekend and shows Tess a disturbing drawing she made while explaining to Tess, "He did kill her," Tess is sure Poppy saw something or something happened to her. When Poppy returns after another visit to her father, she is repeatedly using profanities and wetting the bed. Tess is certain someone was murdered, Poppy witnessed it, and Jason may be the one responsible.

Parts of the plot make sense. A sudden change in behavior, making disturbing drawings, talking about killing, suddenly swearing, and bed wetting are all definitely concerns that should be brought to a doctor's attention and checked out. Certainly anyone would be concerned about those people your child is in contact with. Tess does all this but then she goes beyond taking believable and reasonable actions and even talks to the police. Tess is obsessed with trying to figure out who committed the crime that she is convinced Poppy witnessed. Obviously, a 3 year-old is an unreliable witness and crayon drawings by a very young child are not a great source of evidence.

While following the plot, Tess's obsessive behavior and investigation is compelling and what will hold your focus on the novel. Tess is the narrator so we are viewing her inner thoughts and beliefs. She is neither completely reliable nor especially likeable. As Tess seems to become more manic, unstable, and unhinged, everyone is a suspect. Keep in mind that there are a lot of unreliable characters. That is the plot of the entire novel: a young child may have seen or heard something and her mother is determined to uncover the murder she believes her daughter saw. Along the way her investigations do reveal a host of secrets and crimes. There are numerous suspects introduced along the way, but Jason is surely the focus of Tess's ire and investigation.

There are a whole lot of holes in the plot and the novel felt bloated. It could have been tightened up. A novel from the writing duo of Nicci French usually means an excellent novel and while this one fell a little short for me, I'll give it a 3.5, rounded up.