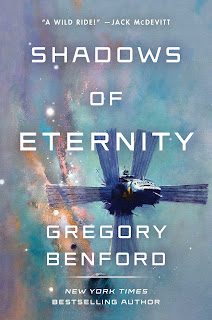 Shadows of Eternity by Gregory Benford is a highly recommended science fiction novel set two centuries in the future and spanning decades.

"Humanity has established a SETI library on the moon to decipher and interpret the many messages from alien societies we have discovered. The most intriguing messages are from complete artificial intelligences... Ruth, a beginner Librarian, must talk to alien minds—who have aggressive agendas of their own." Important: read the post-script, which shares discussions between Benford and Poul Anderson, before the novel as it will provide background information for the actual plot. Also, keep in mind that the format is a collection of short stories rather than a continuous novel.

What I wanted was a hard science fiction space opera following Ruth's work within the SETI library on the moon, discoveries, and subsequent travels, and Benford provided this. The actual format of Shadows of Eternity, however, was a bit of a surprise. It is really a series of short stories following Ruth's start as a Librarian, showcasing some of her subsequent work with alien messages, and then the main encounter that is still broken into shorter stories. The stories are all revolve around Ruth and the SETI library (until the last one), but, as with any novel that is told in this manner, characters are left behind and story lines are left without a resolution.

This disjointed flow of the novel represented in the collection of stories, rather than an ongoing space saga, is part of what I really didn't want. Additionally, the character of Ruth was not all that appealing and I don't think Benford's writing in the voice of a female main character was entirely successful or believable here. There were several scenes and actions that were off-putting and really added nothing to the plot. The latter stories in the novel were more interesting, but as a whole this was an uneven novel. Benford has been a favorite novelist for years. While Shadows of Eternity showcased many of the reasons why, it needed some more editing or a firmer direction and separation of parts. 3.5 rounded up

Disclosure: My review copy was courtesy of Gallery/Saga Press via NetGalley.