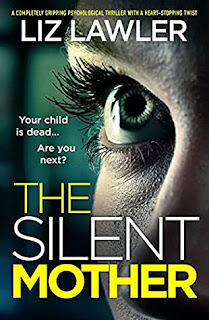 The Silent Mother by Liz Lawler is a recommended investigative mystery.

When Dr. Ruth Bennett receives a call from her son Thomas asking her to come to Bournemouth because he has to appear in court, she naturally goes there. Once there, while waiting for him at the courthouse she learns that Thomas has committed suicide. He was also a doctor and had been charged with stealing drugs from the hospital where he worked. Ruth knows that Tom was innocent. This behavior does not resemble her son and his values at all. What she decides to do is continue to pay rent on Tom's apartment, take a job in the city where Tom worked, and try to uncover the truth behind what happened. Since Tom has his father's last name, people will not know she is his mother and as a doctor she will be able to discover the truth.

As the novel tells the story of Ruth's investigative search for the truth, it also follows Rosie Carlyle, a young woman with problems who Ruth sees as a patient. Rosie seems off from the start. She is anorexic, paranoid, perhaps disillusion or experiencing a mental disorder, and desperately missing her best friend Anabel. Rosie's story line is a bit disjointed as it follows along her thought patterns. This is in stark contrast to Ruth's logical, intelligent search for the truth. Also included in the plot are diary entries from Tom that are shared as Ruth reads them.

This is a well written novel that moves at an even, measured pace throughout Ruth's investigation. While there are some surprises, The Silent Mother is more a novel of discovery rather than shocking revelations. The twist can easily be seen coming, so it isn't really a surprise. The pull of the novel is in uncovering what happened and reaching the final denouement. This is a good novel, but it is slow moving.

The characters are developed. Ruth is an especially sympathetic character as she is looking into what happened to her son. Rosie is less so and readers will immediately realize that she is not a trustworthy character. There are others that Ruth meets along the way who help her or provide information, including landlord Henry, and neighbors Kim, Tilly, and Akito. Many of the people Ruth talks to are hesitant to share their thoughts, but ultimately most find it difficult to believe Tom was guilty.

Disclosure: My review copy was courtesy of Bookouture.
Posted by Lori L at 12:05 PM