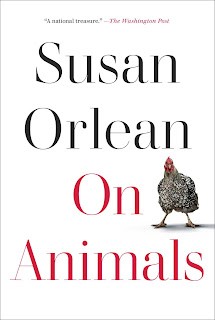 On Animals by Susan Orlean is a very highly recommended entertaining and thoughtful collection of fifteen essays about animals.

Susan Orlean has, as she writes, always been "animalish," something people who have a relationship or interactions with animals will understand. In this collection of essays, previously published in The New Yorker, The Atlantic, and Smithsonian Magazine (the earliest from 1996), she covers a wide variety of animals and animal-human relationships, including: chickens, show dogs, tigers, mules, homing pigeons, animal actors, Keiko the killer whale, oxen, taxidermy, lions, rabbits, pandas, missing dogs, donkeys, and life on a hobby farm. There should be an essay within this collection that will appeal to almost everyone.

What sets this collection apart is the excellent quality of the writing and the variety of the essays. Admittedly, some of the earlier essays, particularly that of Keiko, are dated and perhaps should have included an update. Orlean is not just writing about the particular animal, she's depicting the animals in a specific setting and often time and place. The homing pigeons story, "Little Wing," involves a teenager and her homing pigeons. Biff is the boxer who was a winning show dog. Kevin Richardson is known as the "lion whisperer." Two essays involve the donkeys which seemed to be everywhere in Morocco, and the common sight of oxen in Cuba. She writes about the New Jersey woman kept 23 tigers in her yard. Did you know that most rabbits have the ability to pretend that they’re healthy even when they’re quite sick. And Orleans details the work involved with raising chickens as well a  caring for a large variety of animals. And this is just a small part of the topics covered.

Overall this is a very strong collection that should hold the interest of most readers throughout, although, as with any collection of stories, some will resonate more with various readers than others. I found it delightful, perceptive, and engaging, just as I have found other books by Orlean.

Disclosure: My review copy was courtesy of Simon & Schuster.
Posted by Lori L at 12:35 PM