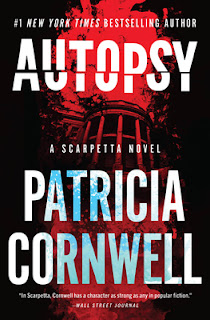 Forensic pathologist Kay Scarpetta has accepted the position of chief medical examiner in Virginia. She is back where she began her career and once again needs to clean up the corruption that has infected the department. Pete Marino is back and hired by Scarpetta to assist her. In the current case a body of a woman, soon identified as that of Gwen Hainey, is found dumped by the railroad tracks with her throat cut and her hands missing. As she investigates, Scarpetta learns of a woman who was murdered a few months earlier in the same area, Cammie Ramada, and is suspicious that the two cases may be connected. Adding to the drama is a case of poisoning, an emergency call to the White House to look at some secret information, and ongoing drama with a secretary who believes she is in charge of the office, not Scarpetta.

Autopsy is described as a relaunch of the Dr. Kay Scarpetta thriller series. As the 25th book in a series that I am very familiar with, it is hard to judge whether a new reader could jump right into Autopsy or not. Cornwell provides brief explanations of the connections between people and their history so I would imagine it is possible. I will say that for long time readers the plot is much better than the last Scarpetta book I read before giving up on the series for awhile.

There is no question that Cornwell is an excellent writer technically. She provides the information and expects the reader to follow the clues along with the investigation without a lot of repetition. The narrative will unconditionally hold your complete attention to the end. The pace of the plot is deliberate and balanced. While there are some surprises along the way, nothing ever feels precarious because Scarpetta is always compose, observant, capable, and in charge. There is perhaps too much time spent on descriptions of the trip to Washington DC when what readers want to know is why were Scarpetta and Wesley called to the White House, but the one real shortcoming in the narrative is that the final denouement felt incomplete and abrupt.