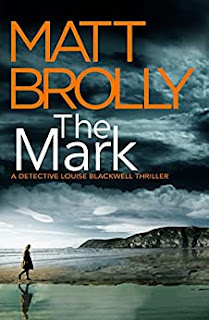 The Mark by Matt Brolly is a highly recommended police procedural and the 4th novel in the Detective Inspector Louise Blackwell series.

DI Louise Blackwell of the Weston-super-Mare police force is called to investigate a man who is found unconscious with a symbol branded on his arm. The victim, Sam Carrington, who is unconscious at the hospital, was staying at a local drug rehab house. The next night a second victim, Poppy Westfield, is found branded on her thigh with the same symbol. Then Andrew Thorpe is found dead, branded on his forehead, and Louise knows she has someone who is targeting people to brand them for some reason and she must find the connection and stop the perpetrator.

While Louise is giving her whole attention to the case, she is also dealing with several other personal issues. After the death of her brother, she is caring for her niece along with her parents. Also returning is her nemesis the corrupt and scheming DCI Finch, whose ongoing bad behavior may be catching up to him, unless he can bring Louise and others down first.

Even though this is the 4th novel featuring Louise Blackwell, The Mark can be enjoyed as a stand alone police procedural. There is enough back story given to easily follow the pertinent facts that matter in this current novel, and this is a compelling and engaging investigation. The opening scene will immediately horrify you and grab your attention. The pace continues to move quickly throughout the novel, as clues are provided along with several twists.

Louise is a determined, intelligent and interesting character. Her flaws are also presented in the plot, which makes her a realistic and sympathetic character who will elicit your support as she handles the investigation.  Along the way there is further character development as the novel progresses. There is a surprising twist at the end that will put the next novel by Brolly featuring Louise Blackwell on your reading list.


Disclosure: My review copy was courtesy of Thomas & Mercer via NetGalley.
Posted by Lori L at 3:40 PM