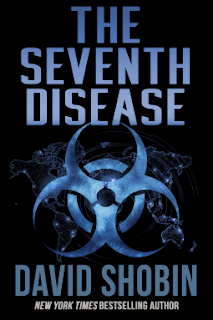 The Seventh Disease by David Shobin is a recommended thriller.

Opening with two men coming to an agreement on how to proceed in a plan covering a generation to start a new pandemic, but be the ones who have the cure available, The Seventh Disease then slows down to a slow crawl for the first half of the novel where the focus is on Dr. Sean Arrington, a Long Island physician and family man. From the beginning Arrington has been unknowingly used by a biochemist in the development of the virus. As his genetic material is needed again before the virus is unleashed on the world, Arrington is suddenly able to piece together that something isn't right. In this case, though, his knowledge could lead to his death.

It must be said again that after an imagination-catching start, the novel then s-l-o-w-s down. This might have been acceptable if Arrington was a complex, personable, likable character, but he just isn't that appealing even though he thinks he is, which was part of the problem. Almost all the women are caricatures and not real people. Let me just say you can tell a man wrote the book and all the descriptions of women were annoying and based on their appearance. The bad guys are also archetypal characters, which I'll accept in their case.

The novel does jump between the present day and back in time, but it is easy to follow what timeline the chapter is in. Once the plague is unleashed, the action picks up, which redeems some of the first half of the book. At this point in the novel you can easily set all disbelief aside as all you're looking for is the race to stop the outbreak. Recommended just for the thrills.

Disclosure: My review copy was courtesy of Crossroad Press.