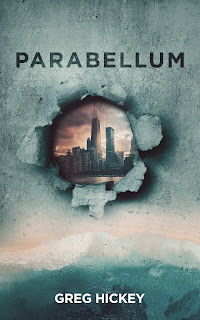 In the opening, we know the crime that will happen. There has been a mass shooting at a beach in Chicago and after we are observers to some of the aftermath, Parabellum then follows four different characters who are potentially suspects for a year leading up to the tragic incident. The four characters who could be the suspect are not named, but are identified by a general description. They include: an apathetic computer programmer; an ex-college athlete with a history of hits to the head;  an Army veteran turned Chicago cop; and a despondent high school student. The narrative switches between the lives of these four characters as each chapter counts down to the future shooting.

Reducing the characters to descriptions of their inner battles and anxieties with their mental health rather than providing them name somehow dehumanized them, even while we learned about their most personal struggles and why they could potentially be the shooter at the beach. Most of these characters will generally elicit your sympathy as you understand that their inner turmoil and struggles are real. The inner psyche of each person is exposed as are their concerns and anxieties. They are developed as characters, which helped with the felt lack of not knowing their names.

The writing is excellent, which sets the novel apart. The characters and the plot are all presented in a realistic, factual manner. Although there was some uncertainty at the beginning, ultimately the structure of the novel did provide compelling interest in the characters and what would ultimately be revealed. Admittedly, the unique approach to keeping the characters nameless until the end didn't completely work for me, but I appreciated the approach more once I continued reading and the pages began to fly by as I wanted to know what would happen to these injured people.

Disclosure: My review copy was courtesy of the author.
Posted by Lori L at 12:18 PM