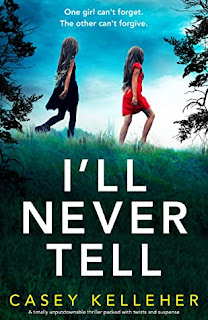 Alessia has a wonderful life with her husband, Carl, and their young son, Jacob. After her past, which she keeps secret, she never thought she would have this current life of satisfaction and happiness. When a brick with a note tied around it is thrown through a front window, she immediately realizes that her current life is under attack. The note said "Found You" and it is followed quickly by other frightening occurrences that point to Alessia's past coming back to haunt her. She is sure her childhood friend, Sarah, is responsible.

The narrative unfolds through two different timelines in chapters headed as "Now" and "Then" with 20 years separating the action. Emma-Jayne, 12, had a friend named Sarah, 10, and the two played in an abandoned house they called the doll house. Something terrible happened there. Emily-Jayne keeps telling the police that Sarah did it, but they don't believe her. She is the one who was sent to an institution until she was 18. After this, she changed her name and lived a quiet, unassuming life. Meeting Carl was something she never thought would happen in her life.

This is a short, fast-paced novel and Alessia is, in general, a believable character although you will question some of her actions which seem illogical. There is a lot of sympathy for both Alessia and young Emma-Jayne. It becomes clear in both timelines that they are unreliable narrators.  The plot is interesting, but after a few chapter you will be able to figure out what is going on. Soon you will be able to predict who is responsible for the harassment and just need to get to the end to see if you were right. Likely you will be correct. Setting the predictability of the plot aside, there will be a few twists and surprises. You will also have to set aside some disbelief in order to enjoy the novel. 3.5 rounded up.


Disclosure: My review copy was courtesy of Bookouture.
Posted by Lori L at 4:28 PM