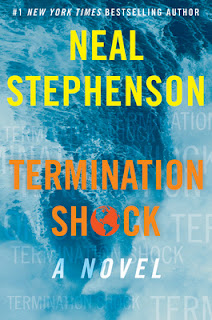 A change of climate in the future has resulted in rising temperatures, heat waves, superstorms, flooding, and rising sea levels. Billionaire T. R. Schmidt has a plan and has invited a selected small group of representatives from across the world to Houston. He has a plan to reverse global warming and is about to set it into action for his guests. The guests include the Queen of the Netherlands, who asks to be called Saskia, and her entourage, who, due to a storm, were forced to make an emergency landing in Waco. Their landing resulted in meeting Rufus during a scene involving wild boars, alligators, and a crashed plane. Rufus helps them get to Houston and becomes a part of T.R.'s team.

In another narrative thread we are introduced to Laks, a Canadian Sikh who travels to the Punjab to help assist at oxygen centers there. He stays there to learn more stick fighting techniques and eventually meets others and they all make their way to the Line of Actual Control. There Laks and the others engage in fighting the Chinese with sticks and rocks to defend their homeland from the Chinese.

Chapters switch between story lines and characters set in different parts of the world until they eventually merge at the end. The beginning of this massive novel will grab your attention and propel you forward. The geoengineering solution that T.R. comes up with and begins to undertake is very interesting. Right up to learning T.R.'s plan and seeing it in action, I was engrossed in the novel. Then it slowed down and became a chore to read.

In any cli-sci novel you want to see the solution along with the complications intelligently presented and follow the execution of the plan, which Stephenson does. However, after introducing many of the players and setting events into motion the story itself slows to a crawl and feels bloated and long-winded. The actual plot could have been presented and reached a resolution much quicker. Additionally, the characters are certainly all very well developed, but there are also a lot of them and not all deserve or need the level of attention that they are given.