The Insecure Mind of Sergei Kraev 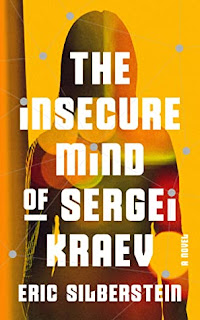 The Insecure Mind of Sergei Kraev by Eric Silberstein is a highly recommended speculative/science fiction novel set in 2100.

Neural Implants are now a normal part of life and people are connected all the time with each other, and the media. The Board of Reality Overseers blocks false information from spreading through the implants. In this future world, graduate student Sergei Kraev, along with two other students, Karima and Daniel, are given the task of writing  code that will work with neural implants to provide an olfactory experience. When Karima turns down Sergei's advances and starts a relationship with and later marries Daniel, Sergei leaves the program early for the private sector. At the same time Sunny Kim (think K-pop star) is a spoiled, self centered, evil dancer whose family pays for her acceptance into a popular dance troupe. She is later forced to leave and starts her own group/cult, which Sergei is tricked into joining.

Good news and bad news: The Insecure Mind of Sergei Kraev opens with a horrifying, shocking event called the 4-17 apocalypse. This event, which is actually foreshadows the climax of the book, will keep you reading to discover the backstory of what happened and why. The bad news is that the opening event might have had an even greater impact had it followed the backstory leading up to the terrifying event. The plot is set mainly in Israel, Korea, and Singapore. The narrative is told through the point of view of several different characters and there are several twists along the way.

Disclosure: My review copy was courtesy of NetGalley.