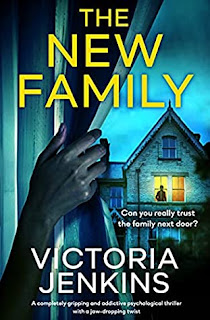 The New Family by Victoria Jenkins is a very highly recommended psychological thriller.

When Oliver and his three-year-old son, Fin, decide to rent Brooke's family home along the coast in south Wales for several months, she is thankful to have the income of a longer term rental during the off season, especially after Brooke's studio is burned in an act of arson. The Father and son were staying at an area B and B so they can easily move in quickly. It doesn't hurt that Oliver is a handsome young man who seems to have had a sad past, much like Brooke herself.

In London over a year earlier, Christina, a new mother of twins is trying to cope with being a mother. She loves being a physiotherapist, but feels she is losing herself. Adding to this is the fact that she feels sick all the time, is having difficulty sleeping, and is struggling with in her marriage to Matthew. She starts a brief affair with Joel, but ends it with determination to work on her marriage. After she ends the affair, Joel begins sending her messages threatening her that it's not over.

Both Brooke and Christina are well developed characters. They are very different women and are depicted as such. Each of them has a distinct individual personality and are struggling with different problems in their lives. They both are unable to control events happening around them, or experiences from their past, and this makes them both realistic but flawed people.

This well written novel follows these two completely different narrative threads with mysteries set in two timelines. Both women have had struggles in their past and are trying to the best they can under trying circumstances. Throughout almost all of the novel these two stories are separate, but both narratives are fraught with tension and the foreboding feeling that something nefarious is going to happen. The dual plots both move at a quick pace and are equally engaging and compelling. Beyond the two mysteries in these dual story lines, is the underlying mystery of how these two stories are going to merge. They do merge and in a manner that is unpredictable until it is about to happen.


Disclosure: My review copy was courtesy of Bookouture via NetGalley.
Posted by Lori L at 3:29 PM