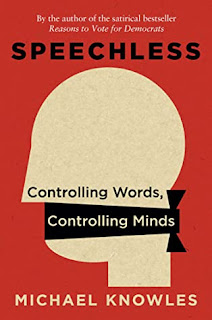 Speechless: Controlling Words, Controlling Minds by Michael Knowles is a very highly recommended, intelligent, thoughtful, and engrossing examination of how political correctness has distorted our use of language resulting in a change in our culture and how we view the world. This change in language and meaning did not come about through natural linguistic development. It has been a cultural assault planned and carried out by liberal academic and bureaucratic extremists who created the new words, there meaning, and how we should react. Then the new acceptable term and our expected reactions have been repeated verbatim by almost all journalists. Watching this and noticing the repetition of the same exact wording by so called journalists has been eye-opening and frightening. Decades of incompetence on both sides has permitted political correctness to invert our culture. The Culture War is over, and we have all lost.

The right are criticized because they allowed this to happen. All cultures cancel some ideas and things over time. The current problem is with what is canceled and why, along with who establishes the standards. The problem is a very small percentage of the population is radically trying to changing the culture without any sort of cultural agreement on these changes or set agreed upon standards. Conservatives need to summon the courage to speak up for the enforcement of their own standards of speech minus the politically correct standards set by the liberals.

There is so much more to Knowles discussion which will be appreciated by anyone who is an intellectual, appreciates a dense discussion with a plethora of quotes, footnotes, and sources, and can think for themselves about current cultural changes. Knowles provides in the appendix a glossary of jargon, a list of works cited, a copious section of notes, and a helpful index. This would make a great gift.