We Live Next Door 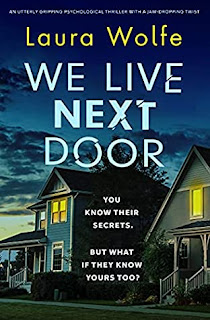 We Live Next Door by Laura Wolfe is a recommended domestic mystery.

Jessica and Mark Millstone have bought the house Jessica grew up in from her mother and now the couple and their daughter Isabelle are comfortably living in the Detroit suburb of Ridgeview Pines. The neighborhood has a private park nearby with a play ground. It is a safe place to live and walk their dog Roo. That is why it is so shocking when neighbor Barbara Draper is found dead. Jessica saw the woman when walking Roo the night before and thought Barbara was shouting something from her window.

Jessica has know her since she was a child and Barbara was considered a neighborhood grouch who often complained and yelled at neighbors out walking dogs. The neighborhood message board app is filled with condolences after Barbara's death, but if you look back in time you can also see many of Barbara's complaints. The death is ruled accidental, but Jessica can't help but think that something is amiss and she begins to look into it. Then she begins receiving threatening messages targeting her family on the neighborhood app and wonders if her neighborhood is as safe as she believes.

Jessica is the narrator of the novel. For the most part following her thoughts works very well, but sometimes her repetition slows down the advancement of the plot. Personally, I felt no connection with Jessica or any of the characters. The other characters seem to be uneven and often resemble caricatures rather than real people. Since many of the characters could be interchangeable with any of a number of characters in other books, the mystery needs to shine as the main focus.

We Live Next Door is a satisfying light-weight mystery and does provide a twist at the end that is not predictable until late in the novel, which makes up for some of the shortcomings. Honestly, this is a commonplace plot - a death in the neighborhood that could be a murder and ongoing threats being made toward the main character and her family. What this means is that the writing and the complexity of the plot need to work together and soar in order to elevate the novel above the ordinary. In that task it falls a little short.