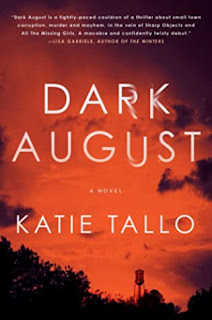 
Dark August by Katie Tallo is a highly recommended mystery following a young woman following the leads from the last case her mother was investigating before her death.

Augusta (Gus) Monet learns that her great grandmother, her last living relative, has just died and that she has inherited the house in Ottawa, Canada. She also inherited Levi, the dog she brought with her to her great grandmother's house as a puppy after her police detective mother died. Then Gus was sent off to boarding school and has had no contact with her last living relative. Once in the house, she discovers in her childhood trunk, hidden among her toys and belongings, some information her mother hid from the last cold case she was investigating - the case that may have led to her death. Gus decides to continue her mother's investigation. The cold case is convoluted and involved, but Gus is determined to delve into the information and notes to try to uncover what her mother saw. What she doesn't expect to do is to stir-up the evil that lurked in the past and may have led to her mother's death.

Gus is a well-developed character who has had a tragic past. As the novel continues and the plot begins to unfold, we can see new faucets to Gus's personality that weren't present in many of the opening pages. Her intelligence and tenacity is perhaps genetic, as she becomes increasingly committed to solving her mother's last cold case. And there are so many questions about so many different aspects of the case and her mother's investigation.

The narrative starts out slow and really doesn't start to grab your attention until the story is well underway. I was going to stop reading it, but fortunately, I forced myself to keep reading and the novel quickly turned into a page-turning twisty mystery full of complicated connections. You have to get past the toxic blast due to fracking that has a town being completely blown up in the past and keep going. (I petulantly said aloud to myself and a few pets in the room at this juncture, "I don't want to read a novel about fracking.") The pieces will slowly start to come together as they lead to new clues and different questions to ask. This is a novel that becomes better and better with each page after you get through the slower opening. Stick with this one and you will be rewarded. The ending totally surprised me. This is a promising debut novel by Tallo.

Disclosure: My review copy was courtesy of HarperCollins.
Posted by Lori L at 5:27 PM