Last One to Lie 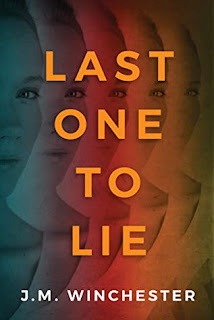 Last One to Lie by J.M. Winchester is a recommended psychological thriller - for romance readers

After her yoga class, Kelsey Jennings goes to pick up her two-year-old daughter, Mikayla, at the child’s day-care center in Ellicott City, Md. Mikayla isn't there, there is no record of her ever being there, and no one knows a child by that name. Kelsey repeatedly calls her husband, Malcolm, but all the calls go to voicemail. Kelsey, obviously, has a complete meltdown at the day care and the police are called. Detective Paul Ryan is assigned her case and begins to investigate. He's certain that something’s up with Kelsey’s story. Along with Mikayla, Malcolm is also missing and Kelsey is suspected of being mentally ill.

All right, the very beginning of this novel will grab your attention and suck you right into the plot - before it gets ludicrous and goes off the rail. During the final scenes when we get the twisty scoop about what is really happening, I immediately recalled inconsistencies from certain parts of the story that were suddenly ridiculous and incompatible based on the new information. Also you could tell that Winchester is a romance writer under another name. The immediate attraction and sex scenes struck me as absurd and were a negative and a huge turn off for me. Why the recommendation? Because it seems that a whole lot of other readers liked it and were probably okay with all the incongruous details as long as they get the steamy, sexy attraction bits and the twisty ending (which has been done before and better.)

Disclosure: My review copy was courtesy of Thomas & Mercer.