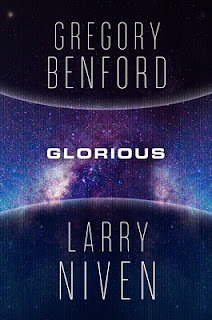 
Glorious by Gregory Benford and Larry Niven is a highly recommended third installment of the hard science fiction Bowl of Heaven series.

This is the final installment of a hard science fiction space opera series by science fiction masters Benford and Niven. The crew of the Sunseeker was tasked with spreading humanity throughout the galaxy, but they have encountered many extraterrestrial beings along the way and added to their crew. Included in the crew is the husband-and-wife biologist team Cliff Kammash and Beth Marble. The starship is now headed toward their original destination, Glory, a planetary system with a complex artificially engineered orbital system. Benford excels at the real scientific specifics in the narrative while Niven enjoys giving the various aliens a personality. And there are many technical details and many unique aliens.

Once you start this densely pack story, you will realize that it would behoove you to have read the first two novels in the series first so you know the background and can follow along with the action with a bit more ease.  The first novel is Bowl of Heaven and the second is Shipstar. Catching up with the background I missed slowed my reading down as did the technical details. This is an exciting addition to hard science fiction, but it will take time and concentration to read.


Disclosure: My review copy was courtesy of Macmillian.
Posted by Lori L at 3:56 PM