The Distant Dead by Heather Young 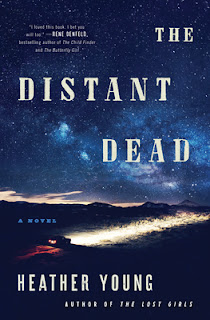 The Distant Dead by Heather Young is a very highly recommended murder mystery set in a small desert town.

After his mother died, twelve-year-old Sal Prentiss went to live with his uncles on a remote ranch outside of Marzen, Nevada, a very, very small town near Lovelock.  He finds a burned corpse one morning and reports it to Jake Sanchez, at the fire station, the closest thing Marzen has to a police department. Sal tells Jake that he thinks it is his math teacher, Adam Merkel because he recognized his nearby car. Merkel was a math professor at the university in Reno, but he has taken a job in Lovelock as a middle school math teacher. Merkel was a quiet man who connected with one of his students, Sal, and the two shared a trusting, mentoring friendship. His murder shocks the small community and rumors fly.

Nora Wheaton is the middle school’s social studies teacher and she considered Adam Merkel a friend. After college she planned to stay far away from Lovelock, but ended up returning to care for her disabled father after an accident that he survived but her brother didn't. She loves him but she has not forgiven him. After Adam's death, she begins her own investigation. It seems to her that Sal is fearful and hiding something. Nora begins to look for Adam's killer, but she also looks into his past, which contains a tragedy that she understands.

The narrative unfolds through chapters from the individual point-of-view of Sal, Jake, and Nora. After the murder, Sal's story begins in the past before the murder happens and follows his story leading up to the present. Jake and Nora's chapters are both chronicles from the present, while they also reveal their pasts. The characters are dealing with personal struggles and issues that carry over to the present. This truly is a drama worthy of a Greek Tragedy. In this tragedy the Fates are busy weaving a heartbreaking connection in their lives to each other and to all of their stories. The narrative is emotional, intense, heartbreaking, and poignant.

The well-developed characters are depicted as real people - complex, flawed, isolated, resilient, and broken. They are all dealing with various incidents in their pasts that still affect their lives. There is a glimmer of a promise for a future and a hope that forgiveness will bring them some measure of freedom - if they can allow themselves that measure of grace in their fragile lives. They are all faced with choices from which their decisions will resonate onward. You will feel empathy for all of them. Even the dry, sandy, barren landscape becomes a character

The writing is absolutely excellent and I was glued to the pages of this murder mystery and psychological thriller. The suspense is palpable and taut, while the writing is so perfect that the novel feels impossible to put down. This is one of those magic novels that capture both the seemingly impossible current heartbreak in everyone's lives, but also the possibilities for a future, forgiveness, and perhaps even hope.