The Monsters We Make

The Monsters We Make by Kali White
Crooked Lane Books: 8/11/20 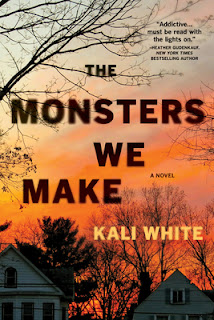 
The Monsters We Make by Kali White is a recommended family drama set in the 1980's following the disappearances of two paperboys from Des Moines, Iowa.

In 1982 a paperboy goes missing and is never found. Two years later in August 1984, paperboy Christopher Stewart goes missing from his morning paper route. Twelve-year-old Sammy Cox, who has a paper route, runs home, afraid of someone but he is keeping this a secret. His sister Crystal, seventeen, is concerned about the missing boys but also sees it as an opportunity to write a great college entrance essay that could win her a scholarship, so she begins looking into it. Officer Dale Goodkind has just moved to this part of Des Moines and now there is another paperboy who is missing and he is put on this case too. Dale, who is clinically depressed, may not be up to the task.

This novel is fiction, but is based on the real-life Des Moines Register paperboy kidnappings in the early 1980's. The novel follows Dale, Crystal and Sammy as the investigation continues and potential suspects enter the story. As the investigation unfolds through the point-of-view these three characters, you will care about what happens to them, especially Crystal and Sammy. There is some good coverage of what a pedophile/predator says and does to control victims and manipulate them.

Touchstones of the 80's are well-integrated into the narrative setting the time and place of the setting. All the people in the 80s weren't quite as naive or unsuspecting as White depicts, however, especially in a city, which Des Moines is and was back then. Sure, some were, but some were also quite aware of stranger danger. The plot does slow down in the middle and the ending occurs rather abruptly. The novel is also very predictable. Additionally, Officer Goodkind's personal problems and struggles do detract from the story and the investigation.