The Girl from Widow Hills

The Girl from Widow Hills by Megan Miranda 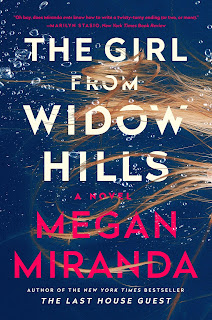 
The Girl from Widow Hills by Megan Miranda is a very highly recommended, outstanding novel of psychological suspense. This one is a winner!

Everyone knows the story of "the girl from Widow Hills." Arden Maynor was six years old when she became that girl, the girl from Widow Hills, Kentucky, the one who made national news during the search for her and her rescue. Arden was swept away into the storm drains when she was sleepwalking during a storm. The search lasted three days. Against all odds, she was found, alive, clinging to a storm drain. Fame and media attention followed. Everyone was focused on her, including fans and stalkers. Her mother wrote a book about the incident. Every year, when the anniversary date came up, the fervor began again. Her mother benefited financially from the interest and took advantage of it. As soon as she could, Arden legally changed her name to Olivia (Liv) Meyer so she could escape the public attention and live a private life.

Now she lives in Central Valley, N.C. and has a good job as a hospital administrator, but the twentieth anniversary of her rescue is approaching, which means the media will renew their interest in Arden. Her estranged mother passed away six months earlier, so they won't be able to contact her for an interview. Even though she feels like she has hidden her past, Olivia begins to feel like she's being watched and when a stranger approaches her outside the store, she starts to become alarmed. Then one night she is jolted away by a ringing phone. She discovers she is outside, and stumbles over a dead body. She doesn't remember killing the man and has no idea who he was - until his name is revealed to her by the police. The man was involved with her rescue when she was six. Who killed him? How did he find her?

Olivia is a well-developed character. You will want to support her and hope for the best. She is an unreliable narrator, as she admits to the reader to not remembering what happened the night the body was found and she had been sleepwalking a night before. The thing is, you will be on her side. You'll be rooting for her, hoping for the best, wanting to assist her in finding out what really happened. You might even tell her aloud to be more suspicious of that person, or to be cautious there, Olivia.

The plot of The Girl from Widow Hills immediately grabbed my attention. This is a well-written, excellent, well-paced whodunit. I was totally engrossed in this first-rate novel of psychological suspense from beginning to end. The tension keeps mounting incrementally as Olivia is investigated, and begins to investigate on her own. Olivia narrates the novel, but Miranda cleverly uses media transcripts, newspaper reports, book excerpts, and voicemails from the past up to the present to add a depth to the narrative. I smugly thought I had everything figured out several times, but then was blown out of the water by the twisty, shocking ending. Well done, Megan Miranda! Miranda is fast becoming one of my favorite go-to novelists for a guaranteed winner.