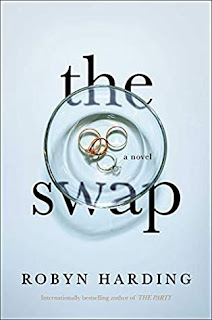 The Swap by Robyn Harding is a highly recommended psychological thriller.

Low Morrison is a teen who doesn't fit in with her peers on Hawking, an island in the Pacific Northwest, so when she sees a glamorous woman, Freya, put up an ad for pottery classes, she signs up. Low is immediately captivated by Freya and is entranced by everything about her. Freya basks in Low's adoration and shares all sorts of personal information with her while calling Low her best friend. Freya and her husband, Max, who used to be a professional hockey player, moved to the island to get away from a scandal that ruined Max’s career and Freya’s status as a social media influencer. Low is thrilled to be Freya's friend, so when Freya meets and becomes good friends with Jamie, a woman who recently moved to the island with Brian, her husband, Low feels betrayed and threatened. But Freya dumps Low for Jamie and then proceeds to use her friendship with Jamie to manipulate her and Brian into a partner swapping night. Unfortunately, Low was watching the house and saw what was happening.

The narrative is told through the point-of-view of Low, Jamie, Max, and Brian. It will be clear to the reader that Freya has a toxic, manipulative personality and uses those around her for her benefit. We don't have insight into Freya's mindset, but we know enough about her background to have some real suspicions about what is really going on. Low is the most developed of the characters, followed by Jamie. Following the point-of-view of everyone but Freya worked quite well in this novel. We know why the other characters fell under her spell and we can watch her manipulate everyone.

The plot, in spite of some involuntary eye-rolling, was also strangely addictive. The schemes, lies, betrayals, secrets, and drama pulled me in and immersed me into this psychological thriller. This is truly a tale of two sociopaths, circling each other like black holes while using everyone around them. No character is likeable, except, maybe Jamie, but maybe not...  Actually, I feel a little guilty and dirty for reading The Swap.

Disclosure: My review copy was courtesy of Simon & Schuster.
Posted by Lori L at 3:51 PM