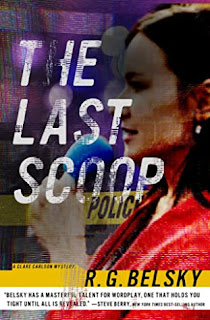 
The Last Scoop by R. G. Belsky is a highly recommended mystery and the third in the Clare Carlson series.

Clare Carlson is the news director of a New York City Channel 10 News. When she learns about the death of her mentor and first newspaper editor Martin Barlow, she is remorseful that she wasn't able to meet with him when he contacted her, telling her that he was working on the biggest story of his career and wanted to share information concerning his investigation. Clare decides to look into the files on the stories he was researching. The first story has ties to the New York District Attorney Terri Hartwell's political aspirations and mob owned property. She also discovers he had evidence about a serial killer he’s dubbed "The Wanderer" who has been killing women for years. Clare takes some risks with her job and her life to break the stories.

The Last Scoop really contains two different stories. They have some ties with each other and are somewhat connected, but are really presented as two different stories rather than connecting stories that Clare is working on simultaneously. And the novel is presented as having multiple parts. I was intrigued at the beginning of the novel and basically enjoyed it to the end, but I did feel that the presentation could have been better. I wanted the story of The Wanderer, and although I can appreciate the first story, my interest in the whole novel would have been higher if everything was tied together more tightly.

Although this is the third book in the series, this is the first novel Clare Carlson novel I have read, so it can be read as a standalone. You would likely get more background details on Clare from the previous novels, but enough information is presented to understand her character. Some readers might be put-off by her disastrous personal life, but it is easy to focus on the information she is uncovering while looking into Barlow's research notes. Clare's inclination seems to be to make poor choices in her personal life.

The writing is good and captures the tone of current journalism in the news business well. Past cases are mentioned, but new readers will be able to follow the story. There was one ending of a story arch I loved. I enjoyed most of the novel except the final denouement of the whole novel which was disappointing to me and a letdown after the fast pace of the narrative up to the end. I did enjoy The Last Scoop and would read the next Clare Carlson novel.

Disclosure: My review copy was courtesy of Oceanview Publishing.