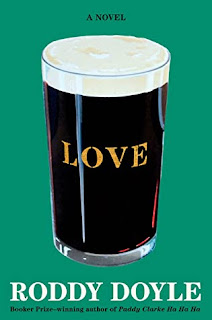 Love by Roddy Doyle is a highly recommended novel about the friendship of two aging males during an evening of drinking and storytelling.

Davy and Joe were drinking pals back in their Dublin youth. Their friendship has continued, albeit only for a pint or two when Davy comes over from England to visit his elderly father. This novel covers an unusual night when the two engage in a real bender in several different pubs. Joe is telling the story about leaving his wife for a woman they both knew four decades before. Their memory of events involving this woman years earlier differs, but the two keep talking and drinking. At the end of the night you discover the reason Davy needs the connection with his friend.

The plot consists of two men talking and drinking over a long night. The novel is narrated by Davy so interspersed in the dialogue between the two men is some inner contemplation by Davy over events in his life which lead up to the emotional climax.  The novel does not feature fast-paced action or shocking revelations, but rather it follows the deliberate, steady pace of a conversation between two long-time friends. Love is a novel of male friendship, aging, guilt, and the ineffectiveness of language to explain affairs of the heart.

The dialogue, which goes round and round, can be tiresome and the lack of punctuation marks may put some readers off. Davy listens to Joe and provokes him. At time they both seem to dislike each other and then work back to their friendship. There is also humor in the novel, found in the dialogue between the two. This is one of those novels that readers will either appreciate or tire of due to the lack of a plot. Those who press on through the endless pints and discussion will find a satisfying ending.