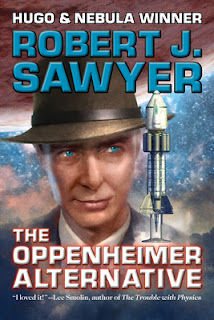 "While J. Robert Oppenheimer and his Manhattan Project team struggle to develop the A-bomb, Edward Teller wants something even more devastating: a bomb based on nuclear fusion —the mechanism that powers the sun. Teller’s research leads to a terrifying discovery: by the year 2030, the sun will eject its outermost layer, destroying the entire inner solar system—including Earth. As the war ends with the use of fission bombs against Japan, Oppenheimer's team, plus Albert Einstein and Wernher von Braun, stay together—the greatest scientific geniuses from the last century racing against time to save our future. Meticulously researched and replete with real-life characters and events, The Oppenheimer Alternative is a breathtaking adventure through both real and alternate history."

This is an alternate history of physicist J. Robert Oppenheimer from Hugo and Nebula Award–winner science fiction master Robert Sawyer. In this alternate world Oppenheimer has an opportunity to use his genius to save the world. The Sun has an unstable core and scientists need to figure out how to shield the Earth and see if humanity can flee to Mars to find refuge. Sawyer uses plenty of scientific and historical details to support his novel.  The plot itself is well done as everything hinges on decisions and discoveries that are made by the characters. As expected, the quality of the writing is great.

Obviously Oppenheimer is a well-developed character. Sawyer did a lot of research into the person and it shows in his depiction of Oppenheimer. The science is definitely present in the novel.  Although his romances detract a bit form the story, they do add an additional layer to the characterization of the man versus the scientific genius. For history buffs there are a lot of historical rt of the novel where details that enhance the story. The first part of the novel follows history more closely before the second half where Sawyer becomes the "what if" part of the novel where he delves deeper into science fiction.

Sawyer includes a bibliography at the end to direct people who are interested to his research into Oppenheimer's life. This will help those who need it uncover what is fiction and what is fact. For those who know Oppenheimer's story, this is a fascinating take on an alternate history of the life of a fascinating man during an historic time and a supposition of what might have been.

Disclosure: My review copy was courtesy of CAEZIK.
Posted by Lori L at 6:42 PM