The Lightness by Emily Temple 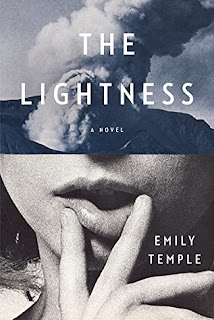 The Lightness by Emily Temple is a recommended meditative novel on dysfunctional adolescent female friendships at a "Buddhist Boot Camp for Bad Girls."

Olivia adored her father so she was heartbroken when he went to a meditation retreat in the mountains, became Buddhist, and left his family. He disappeared from her life, leaving her with her volatile mother. She manages to follow her father's steps, attending the same Buddhist retreat, a high-altitude spiritual retreat known as the Levitation Center, during the summer camp for teen girls. Olivia ends up having a trio of girls who are returning campers led by Serena, with followers Janet and Laurel, befriend her. Serena, who has special privileges, directs the others in questionable and even dangerous activities in the pursuit of enlightenment with the goal of learning to levitate.

This is a dark, moody coming-of-age novel on female friendship, angst, adolescent desires, passions, obsessions and religious zeal. The power teens can have over each other's actions and beliefs is explored. The dense intelligent prose lends a fevered dream-like quality to the narrative. The world created here is insular, and the group of girls seems separate from other, normal societal expectations. The character of Olivia is eventually well-developed, but the journey to get to the answers became tedious at times.

In some ways the denseness of the prose overwhelms the story, leaving the reader to expect much more from the secret hinted at revelations than those that are revealed. There is plenty of foreshadowing that ultimately was a letdown because I had pretty much figured out what was going to happen. In the end this is a story of angsty, hormonal teenage girls who are unreliable narrators searching for power and belonging at a Buddhist camp. I'm not the target audience for this one as I tired of it rather quickly. It could be due to the current tension-filled reality which overshadows most fiction.