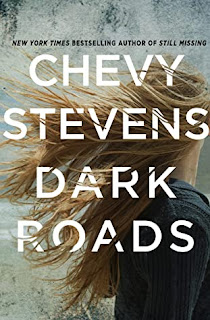 The Cold Creek Highway is an isolated stretch of road through British Columbia that is known as a place where young women go missing. It is said the women were all victims of a serial killer, although no one has ever been charged in any of the cases. Cold Creek is a small town along the highway. Hailey McBride, 17, has grown up there with her father who taught her how to survive and live off the land. Her father was recently killed in a car accident and now Hailey is living with her Aunt Lana and her husband, Police Sargent Vaughn. Vaughn is known as "The Iceman" and roundly disliked by the local teens. Vaughn is more than just dislikeable, he is an authoritarian, controlling man who is watching Hailey constantly. Once she finds out what he is keeping hidden in the back shed, his office, she knows that she needs to leave, hide in a secluded location, and use her survival skills until she turns eighteen and can escape him. She hopes she will be assumed to be another victim of the highway killer

The novel is divided up into three parts. The first is focused on Hailey, while the second is the experiences of Beth Chevalier a year later. Beth arrives in Cold Creek to attend the annual memorial service for the highway victims after her sister Amber was recently found dead by the highway. She is grieving, unable to continue on with her previous life, estranged from her parents, and living in Cold Creek trying to understand what happened to her sister. She takes a job at the diner where Amber worked and meets the locals.

Stevens brings her incredible talent and ability to write an unputdownable thriller to Dark Roads. The tension and sense of menace is palpable. First you have a highway where women have been disappearing for years. Next you have Vaughn who is a creepy, dictatorial despot who will make your skin crawl. Throughout the novel there is an undercurrent of impending doom that keeps intensifying, spreading, and growing. Once you start reading it is hard to set it down. The pacing is perfect. When the tension becomes too much, Stevens provides a respite before ratcheting up the suspense again.

The characters are all finely drawn and feel and react like real people- except Vaughn who just seems evil all the time. The narrative is both character driven and a psychological thriller. Part way through the story the plot slightly strays off into more of a character driven coming-of-age story, but quickly returns to the tense survival story. The ending is twisty, adrenaline-filled, and perfect. I have loved every novel Chevy Stevens has written and this is no exception. Oh, and there is a dog named Wolf.