When All Light Fails 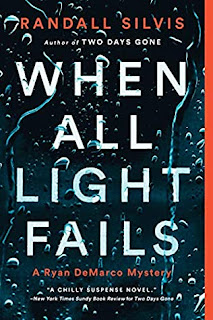 When All Light Fails by Randall Silvis is a highly recommended mystery/procedural and the fifth book in the Ryan DeMarco series.

Starting off with a shocking, heart-stopping resolution of the narrative left hanging in the previous novel, No Woods So Dark as These (2020), in When All Light Fails Ryan and Jayme take on a new case, but to an even greater extent, Ryan contemplates the meaning of life after a near death experience and the two continue healing. The case starts out as a look into the truth behind the letters Emma, a nine-year-old girl in Michigan, sent to three prominent men. Emma says her mother is very ill and one of the men is supposed to be her father. District Court Judge Emeritus J.D. Morrison is one of the recipients and he asks Ryan and Jayme to investigate the paternity claim. They set off to Michigan and, once they look into Emma and the situation, they take themselves off the judge's payroll and take on the case pro bono to find an answer and justice for Emma. But powerful people like to keep their secrets.

Ryan and Jayme are both still healing, contemplative, and stunned from events that occur right at the start of the novel, as is state police officer Daniella ( Dani) Flores. Adding to the introspective mood of this whole plot is DeMarco's philosophical and pensive ruminations about the meaning of life and our role in it. Due to his experiences, he has a personality change in this novel. This plot allows Silvis the freedom to explore the age old question about the meaning of life and death through the character of DeMarco. While these musings do tend to go on a bit long, they do set the right tone for what may be the final DeMarco novel. As expected, the writing is very descriptive and can be almost poetic at times.

Naturally Ryan and Jayme are well developed characters across the five novels. Those who are reading this as a stand-alone novel may want to start earlier in the series, or at least read the previous novel, No Woods So Dark as These before starting When All Light Fails.

Disclosure: My review copy was courtesy of Sourcebooks.
Posted by Lori L at 2:55 PM